Many people, whether you are knowledgeable about commercial electricity, how it flows, and different types of circuits or not, have probably at least heard of a GFI/GFCI, which stands for “Ground-fault Circuit Interrupter” (you may have learned something already!). You also probably already know what these are used for, they’re installed in bathrooms, kitchens, and laundry rooms. However, unless you’re an electrician or have researched this before, the way they work may be unknown, let’s start there.

A ground fault circuit interrupter (GFCI), also known as a ground fault interrupter (GFI), is a device that shuts off an electric circuit when it detects that current is flowing along an unintended path, such as through water or a person. In layman’s terms, a GFCI keeps people from getting shocked or electrocuted by shutting off when the circuit is interrupted by water or from a person. The way that it does this is through constantly measuring and comparing the output and returning currents, when the currents do not match up, the GFCI trips and must be reset. The photo below shows a pretty simple illustration of how a GFCI works. 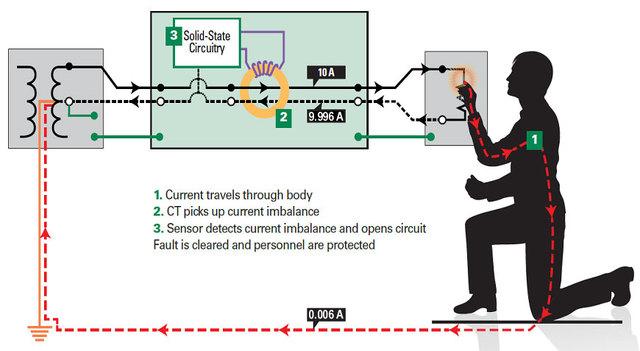 There are three main types of GFCIs, but only two that we will focus on in this post. The one that will not be discussed is the portable GFCI. Think of this as a short extension cord (hence the “portable”) that can serve as a GFCI. The main two, as you may have guessed from the title is the GFCI outlet and circuit breaker. A GFCI outlet is exactly what it seems, it is an outlet that is “GFCI protected”, meaning that it will do exactly as described above. A GFCI circuit breaker is very similar, except that it is installed in the breaker box, rather than as an outlet. Another big difference is that a GFCI circuit breaker protects a whole circuit, rather than just one outlet. So instead of having 4-5 different GFCI outlets, the home could just have one GFCI circuit breaker.

There are pros and cons to both of these options, whether going with a GFCI outlet or a GFCI circuit breaker. However, because we are a basement and crawlspace waterproofing company, we are going to focus on the application of this different GFCIs in these areas. The answer without a doubt is to go with a GFCI circuit breaker in basements, and especially the crawlspace. The reason is not a very complicated one and is more of a convenience than anything. The word convenience is thrown out, because, in reality, a GFCI outlet and a GFCI circuit breaker are almost the same thing, and definitely perform the same function.

A little background may be needed to understand why this is more of a convenience for basements and crawlspaces. If a customer is having a product that needs to be plugged in, they are required to provide a dedicated outlet; these products include sump pumps, dehumidifiers, and condensate pumps. I’m sure you’re able to make this connection relatively easily, but we are a waterproofing company, meaning we are dealing with wet areas daily. Since GFCIs are set off by water, it is pretty common for an outlet to be tripped in the areas where our products are installed.

We often get service calls about our products not working/running/etc. Every once in a while, the product is defective, but a lot of times it is as simple as a tripped GFCI outlet. Now some people realize this and will go into the crawlspace to see if the GFCI was tripped, but there are two problems with this. First, it can be a real inconvenience for the homeowner to have to get in their crawl space just to see if this is the problem, whereas, with a GFCI circuit breaker, all they have to do is to check their breaker box. Another issue is that we have a lot of older customers who aren’t actually able to get to their crawlspace, so a GFCI circuit breaker is imperative for them.

Overall, because a GFCI circuit breaker and outlet perform the same function, the convenience of the GFCI circuit far outweighs the benefits of the GFCI outlet, especially in our line of work in dealing with basements and crawl spaces!

Back to Previous Page
Back to News & Events