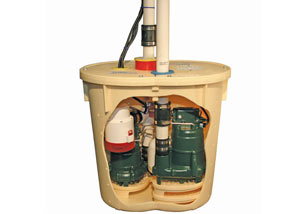 An inside look at our TripleSafe™ Sump Pump System, including the airtight lid, primary pump, secondary pump, and battery backup sump pump.

When you have a perimeter drainage system installed in your home, your sump pump is your main line of defense against a basement flood. If you can't count on your sump system to be powerful or reliable enough, then you can't count on a dry basement. And what good is the space if it gets wet?

At All-Dry of the Carolinas, we install only the best sump pump systems available anywhere in the North Carolina, South Carolina & Georgia area. We have an answer to clogging sump pumps, power failures, torrential rainfall, and much more!

We service Asheville, Greenville, Spartanburg as well as Columbia, Anderson, Lexington, Greer, Hendersonville, Easley, Greenwood and nearby. We can help you dry your basement! For a free sump pump system quote, call or e-mail us today!

By Alfred T. from Blacksburg, SC

By Gerald B. from Mars Hill, NC

By Ann L. from Black Mountain, NC
"They did GREAT! Very professional and respectful and..."

By Dan K. from Weaverville, NC
"My Mother is Kathleen and I am her daughter filling this..."

By Kathleen C. from Marshall, NC
"The lead crew member was very professional and answered all..."

By John C. from Chesnee, SC
"We were very impressed that the president of All-Dry came..."

By Ken A. from Asheville, NC
"David was very knowledgeable and pleasant but he did not..."

By Jo T. from Asheville, NC

Our sump pump systems include the following features:

We also offer our IceGuard® anti-freeze device as an additional feature you can add on to your sump pump system:

At All-Dry of the Carolinas, we offer three different sump pump systems: the TripleSafe™, SuperSump®, and SmartSump™.

Get a FREE Quote!

Our most reliable sump pump system, the TripleSafe™ Sump Pump System, provides three levels of protection for your basement and your peace of mind.

For normal functioning, the TripleSafe™ has a powerful, cast-iron Zoeller® ⅓ horsepower sump pump set at the lowest level. For heavy volumes of water or in case of primary pump failure, a second, more powerful Zoeller® ½ hp pump set a bit higher in the liner will take over.

In case of a power outage, our UltraSump® battery backup sump pump, set at the highest level, will pump 11,500 gallons or more on a fully charged battery!

An UltraSump® battery-powered pump to the SuperSump® system is added so the drainage system can operate when the power goes out. The battery backup system will recharge automatically.

For an effective and more economical solution, our SuperSump® Premier Pump System can help keep the basement dry.

The SuperSump® includes a powerful Zoeller® ⅓ horsepower cast-iron sump pump, capable of pumping 2,220 gallons of water per hour at an 8-foot head out of your basement.

The SuperSump® can be installed with an optional UltraSump® Battery Backup Sump Pump, which can pump out 11,500 gallons or more on a single charge! 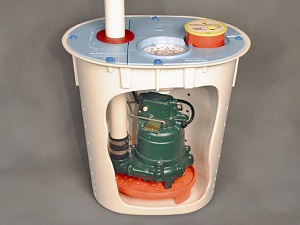 The SmartSump™ system is designed specifically for keeping crawl spaces dry and clean.

If you're looking for a crawl space sump pump solution, the SmartSump™ Crawl Space Sump Pump System is the ideal option. The SmartSump™ is specifically designed for crawl spaces and can provide all the protection you need from leaks and floods.

The SmartSump™ comes equipped with a cast-iron Zoeller® primary pump with the option of adding an UltraSump® Battery Backup Sump Pump. This sump pump is designed to fit with the CleanSpace® liner and has a sump alarm to ensure you always are aware of any water in your crawl space.

More About Our Sump Pump Systems...