Do You Live in a Broken Home?

We will start off by first identifying and describing the three different types of foundation problems: foundation settlement, sagging floors, and wall failure.

Let's start with foundation settlement. First off, what is it? Essentially settlement means that the soil around your home is moving and settling into place from when your builder/contractor initially built your home. Homes are not just placed there, the area around your home is often excavated and after the foundation is laid, the dirt is put back. Since this soil is not packed in very tight, over the years it will start to settle and shift, along with the soil, your home will settle and shift.

We'll start outside and work our way in. Some of the common outside problems include: stair-step cracking, detached/separating chimneys, and cracks around outside windows and doors. Unlike crawlspaces and basements, foundation issues are usually pretty easy to notice, but if not taken seriously, can be overlooked. Stair-step cracking is very simple and is exactly what it sounds like. It goes from brick to brick up (or down) your wall, and as you may have guessed....it looks like a staircase. Cracks around windows and doors generally are stair step cracks, but because the wall is weaker around windows and doors, cracks will often appear here first. If your doors and windows don't seem square, you have cracks from the corners of your doors or windows, or there is separation from window/door to the wall, then you probably have some underlying foundation issues. Last, but not least is the chimney. This is dramatic and sometimes the most obvious sign of foundation problems. Since the chimney on many homes are built on their own small foundation, they will settle even easier and start to completely separate from the home. Signs of foundation settlement inside your home include drywall cracks and "sticky" doors. Drywall cracks often at the top corners of doors and windows inside the home, or cracks that follow drywall seams. "Sticky doors" may also be a sign of sagging floors.

Below are two examples of the types of cracks that often occur in homes that need foundation repair. 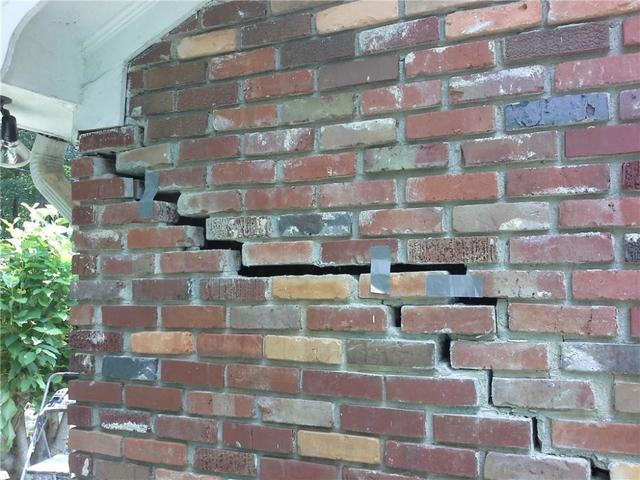 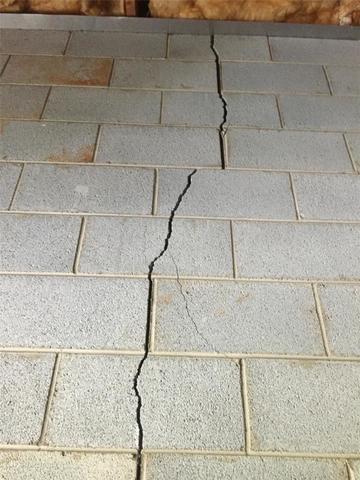 Onto the next...sagging floors! This issue is pretty obvious and does not need much explanation at all. Sagging floors are when your floors start to bow, get lower in some areas, and may even seem bouncy at some points. There are several different signs of sagging floors. Sloping floors are often the most obvious, and if it happens near to a wall, sometimes there is actually a gap between the floor and interior walls. Another sign, similar to the outside of the home are cracks in interior walls, as well as gaps around door frames. Another good way to check is to check out the crawlspace. If you look at the top of the columns in your crawlspace (which are supposed to hold up your home) and they have spaces between the column and girder, you may have some foundation issues.

Last, but certainly not least, we have wall failure. Wall failure is much more common in homes with basements because there is a larger area and a lot of pressure on these walls. However, there are several different symptoms and signs of wall failure in a basement. The first sign is horizontal cracking, which is exactly what it sounds like. This is a horizontal crack in the wall that may start off small, and slowly began to widen. These cracks generally begin to form around the ground level or toward the middle of the wall. Another sign, as with the other types of foundation issues, stair step cracking is another big sign of wall failure. These cracks generally start at the corners of the wall. The next two are very similar, pushing in at the bottom of the wall and sliding in at the top of the wall. These can be pretty serious signs of wall failure. All of the pressure from the outside earth causes enough strain on the wall to actually move the wall and create gaps.

Back to Previous Page
Back to News & Events