This homeowner was dealing with some intense water intrusion issues in their basement, where a lot of their things were stored. This was an important issue to them, because of all of the things that were stored in the basement, which many homeowners don't have. Although the water intrusion was bad, we were still able to come up with a solution that would keep this damage from getting even worse. The system that was installed in this home included WaterGuard drain and a SuperSump pump system. 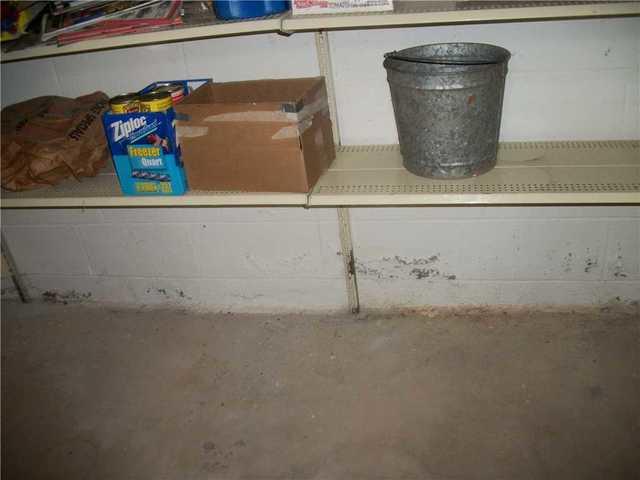 This was one of the better looking areas in the basement. However, even in this area some water intrusion damage can be seen along the wall. As you can see, this homeowner stored a lot in their basement, a lot of which are paper products, which give mold a great place to grow. 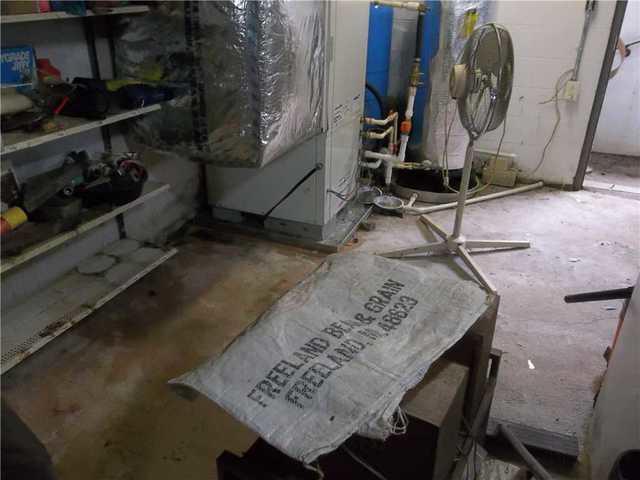 This is a wider view of the basement, but you can see quite a bit of water that has soaked into the concrete towards the left hand side of the picture. This is important, because not only is there water in concrete, but as the water dries water vapor gets into the air, which raises the humidity level and creates the possibility of mold. 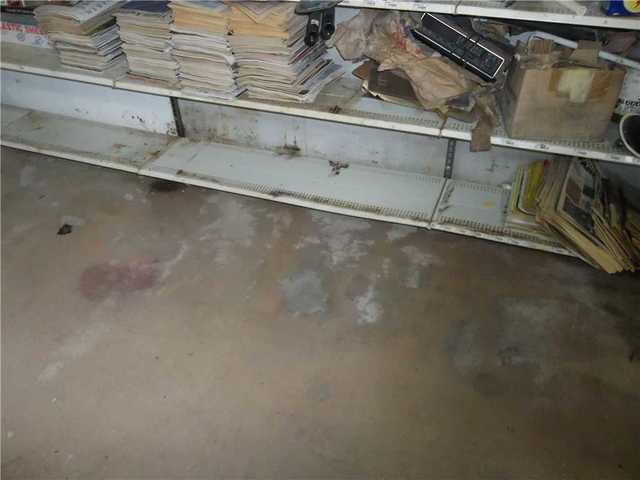 While this doesn't show the best view of how much this area was affected by water intrusion, you can see quite a lot of it on the lower shelf and on some boxes/magazines. One of the bigger issues with this particular basement was all of the paper products that were stored here. These products absorb water much easier and are organic, which gives mold and mildew a great place to grow. 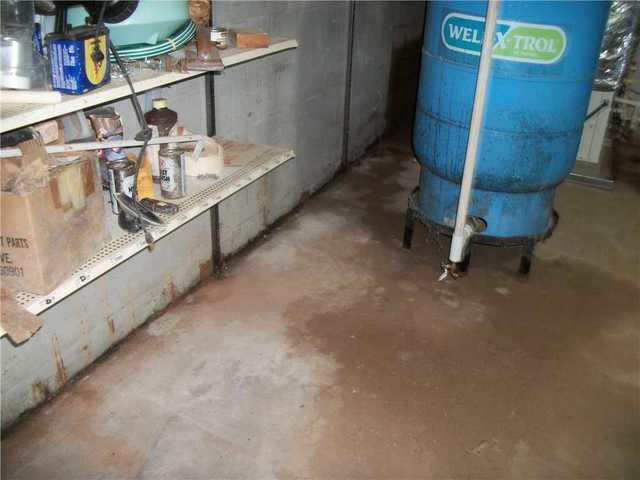 This is one of the areas in the basement that had been affected the most by the water intrusion. As you can see, most of the lower part of the wall is riddled with damaged areas. You can also see a huge wet spot behind the tank, which comes out under and past the tank. 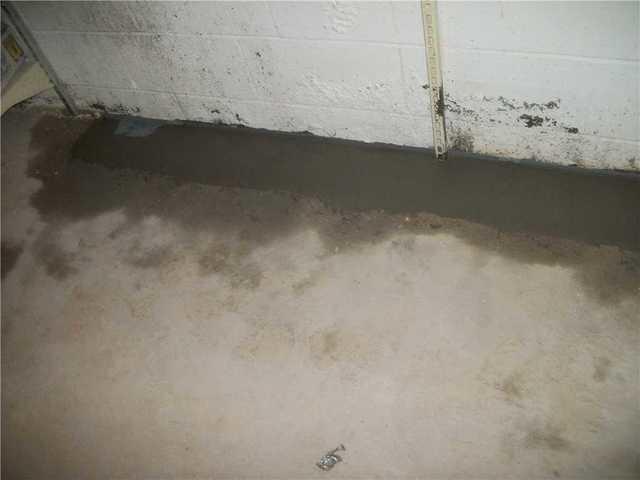 Here is just some of the WaterGuard that was installed in the basement of this home. While it doesn't seem like very much, this drain does an excellent job at preventing the water from staying in your basement. It is immediately caught at the source and drained to the SuperSump. 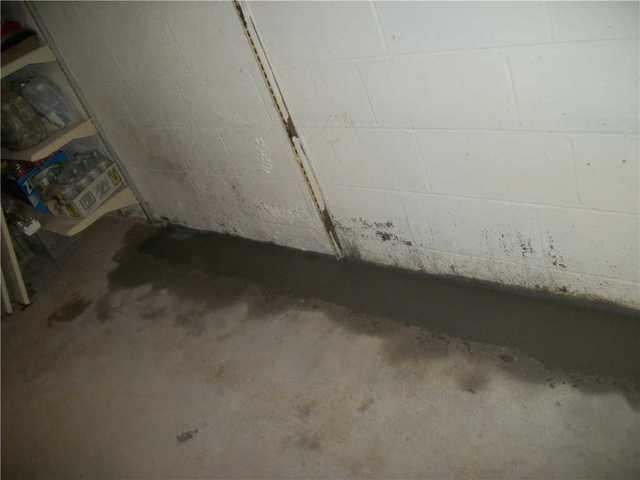 Here is another photo showing off some of the WaterGuard that was installed in the basement. One great thing about WaterGuard is how low-profile it is. Once everything is installed, you can hardly notice anything was installed. It leaves a small gap between the floor and wall, as well as a few inspection ports. 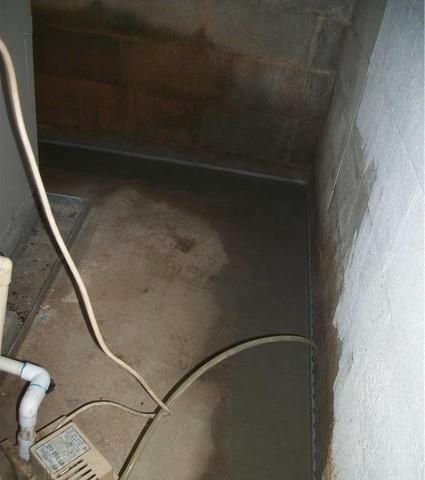 Space Between Floor and Wall

This photo actually gives a pretty good view of the gap that the WaterGuard creates when installed. This gap is certainly big enough to allow water to get into the drain, but is small enough that it doesn't create any hazards and can hardly be seen at all. 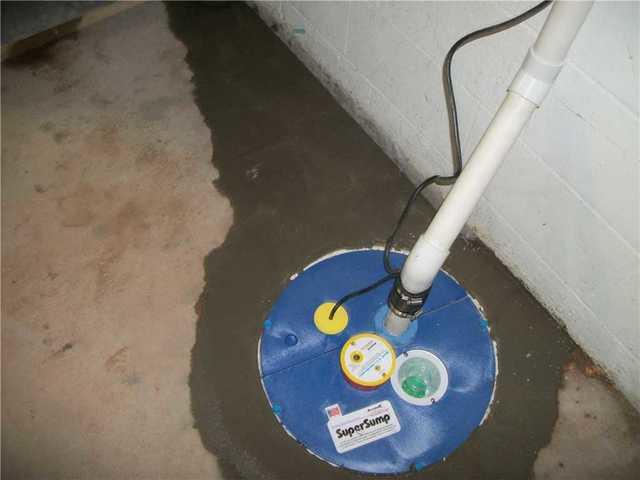 Here is the sump pump system that was installed in this particular basement. This is ultimately where the water that is collected by the WaterGuard ends up. Once the water is here, the pump kicks on and pumps the water out and away from the home. The SuperSump has several different safety features that are built into it, such as an airtight lid and WaterWatch Alarm.

Back to Previous Page